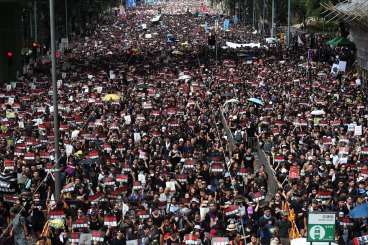 ESSF – How can we explain the mixture of despair (suicides, desire to emigrate) and determination of a large number of the youth?

As for the youth the situation is also worrying. In 2017 the Hong Kong Food and Health Bureau released a report on the mental health of the population, which found that the ratio of Hong Kong children and young people suffering from mental disorders and anxiety is higher than the global average. This was despite Hong Kong being a highly developed city equipped with accessible medical care and a low youth unemployment rate compared to Europe. The report listed a whole range of risk factors, including issues in the family, education and society at large. In general life in Hong Kong is very stressful because except for medical care there is no proper safety net.

As a so called free port, Hong Kong has always been a city dominated by social Darwinism, stressing personal success and competition. Its education system is designed as such and puts a lot of pressure on students. But this internet generation also faces a new challenge which its parents did not. On one hand they, unlike their parents who had still inherited a refugee mentality, have begun to develop a sense of belonging and call Hong Kong their home; on the other hand it is a home where upward mobility is becoming more and more difficult, where a university degree no longer guarantees reasonable wages and real wages have actually stagnated for twenty years. On top of this, Beijing is stepping up its grip over Hong Kong. The combined result of all of the above factors put tremendous stress on young people and those who are more vulnerable have become very desperate. With this broad picture in mind it is not surprising to have seen four suicides where all of them mentioned the China Extradition Bill in their last words.

What is the reaction of the HK population following the devastation of the LegCo? Sympathy? rejection? mixing the two?

To the surprise of many, the majority are supportive or at least sympathetic to the young people. This is because the people were angry with the government’s heavy handed crackdown on protesters on 12 June, and then their anger was further justified and escalated when the government announced it was going to suspend the bill on 15 June, but fell short of withdrawing the bill altogether. The 550,000 turn out on the 1st July march proved that. The storming of the legislature that night was therefore seen as merely an attempt to fight for what many think of as righteous. Surely at this point a threshold was crossed as well.

For many years, at least since the 1967 riot by the Communist Party, Hong Kong people tended to be very moderate in terms of protest. They rarely practiced civil disobedience and saw non-violence as the highest guiding principle. The Umbrella Movement broke with all precedents because, although non-violent, widespread and strong civil disobedience occurred. The 1st July storming of the legislature this year was another rupture, where although the numbers involved in the storming were but a few hundred it enjoyed the active or passive support of many people. Obviously the bill and the bloody crackdown on 12 June taught people that not only what the government did was illegitimate, but that now even the government itself has become illegitimate as well.

On top of this is the fact that the police evacuated the legislature before the protestors stormed into the building, which has made many believe that the government was setting a trap for the protestors. That is also why the movement has gone beyond the initial demands of the Civil Human Rights Front and raised the demand for universal suffrage, because they know that merely withdrawing the bill or making Carrie Lam step down would not solve the legitimacy crisis.

If the government makes more silly mistakes it may take the movement to cross another threshold, i.e, not only common people supporting young people to make an offensive attack on the government but also some of them may take action of their own accord. Carrie Lam is surely concerned about the possible escalation of the movement and hence she held a press conference on 9 July reiterating that “the bill is dead”, assuring that the bill would not come back.

How do the authorities explain why the police didn’t stop the devastation of the LegCo? Is this episode explained by the incompetence of the government, or by a Machiavellian desire to regain control?

They have claimed that the protestors were using inflammable chemicals to attack the police, hence the police, with the good intention of avoiding casualties, retreated from the building. Yet footage shows that the tear gas granite which prompted the police to retreat was kicked out by the policemen who were lining up inside the legislature, when the protestors still remained outside. So circumstantial evidence led many to believe that it is a Machiavellian exercise on the side of the government.

What is the reaction of the opponents of the authorities – Democrats, Civil Human Rights Front, Demosisto, Eddie Chu, etc ?

The pan-democrat parties, including those who supported self-determination, are supportive or sympathetic to the storming of the legislature. There is no condemnation of the act from them. They know that anyone who condemns it is acting against the feeling of the so called “yellow ribbon” camp – people who wore yellow ribbons to show their support for democracy during the Umbrella Movement.

This movement also exhibits a healthier political atmosphere compared to the Umbrella Movement. During the latter, not only did the far right localists (Passion Times for instance) play a destructive role but the relationship between the pan-democrats and the students were also tense in general because of disagreement — the pan-democrats wanted the students to retreat from occupation while the students refused but did not know what to do next either.

In the first stage of the anti-China Extradition Bill campaign the far right localists were less visible. And since this time there is no prolonged occupation the pan-democrats and the young people basically collaborated through a defacto “march separately and strike together” tactic. While the Civil Human Rights Front played the role of facilitating a huge legal march, it was the young people who practiced civil disobedience and fought against the police. But it is also clear that the young generation now takes the initiative in street actions and pan democrats played no role in it. This is simply a continuation of the trend already noticeable in the Umbrella Movement, namely that the pan democrats can no longer provide any kind of political leadership to a rising generation who had much higher political and social expectations, even if they also exhibit strong inclination towards leaderless mobilisation and a taste against organisation.

There are also worrying signs that localist (read “nativists”) inspired actions against Mainland Chinese tourists have been called in Tuen Mun and Shangshui, although it is still not clear how big they may be.

What is the involvement of the Beijing regime? Should we fear an intervention on the ground by the Beijing forces? What level of repression can be expected?

Surely Beijing is very concerned about the situation in Hong Kong. It was reported that Vice-Premier Han Zheng, who is also in charge of Hong Kong affairs, had met Chief Executive Carrie Lam before June 15, the day she suspended the bill. It is widely believed that the idea of such a bill and its eventual suspension were all decided by Beijing, not by Carrie Lam. Her decision to retreat (with Beijing backing) and the rumor that Beijing laid down a bottom line of “no opening of fire” for Carrie Lam’s handling of protestors was not just the result of the huge protest however. Rather it was the huge protest that triggered off a domino effect, which reminded Beijing that it better handle Hong Kong with care.

I am talking about the geo-politics of Hong Kong. The reason that Beijing had to reach an agreement with Britain in 1984 over Hong Kong and promised the latter “one country, two systems” for Hong Kong until 2047 is multi-faceted. Firstly, for the simple reason that it is a modernized city with a very strong UK and US influence — political, economic and cultural influences which Beijing has to respect. Secondly China still needs Hong Kong up to the present. US politicians threatening to revise the US’s Hong Kong Policy Act 1992 is already enough to make Beijing think twice. The act stipulates that the US’s special treatment of Hong Kong, in comparison to its policy towards Mainland China, depends on Hong Kong maintaining its autonomy and “one country, two systems”. The three most important “special treatments” are:

1. “The United States should respect Hong Kong’s status as a separate customs territory”.

The loss of the above treatments will further damage China’s overseas expansion ambition. This fear definitely plays a role in making Beijing prudent over the movement against the bill. Once again Xi Jinping’s administration has overestimated its own strength in the showdown with the West, or with the US in particular. It conducted an all out offensive over the bill, yet once the movement was broadening very quickly and then rippled through the international scene Beijing had no choice but to retreat over the bill.

Therefore, it should not surprise us when Reuters released a report, with the topic China’s PLA signals it will keep Hong Kong-based troops in barracks, saying that Major General Chen Daoxiang from the PLA told Pentagon official David Helvey that the PLA has no intention to intervene Hong Kong. Therefore even if there is more repression coming from the Hong Kong government, a scenario where the People’s Liberation Army will join in the crackdown on Hong Kong is still not very likely, unless Hong Kong protests begin to trigger off anti- government protests in China.

What can we do outside?

Anything from staging protests outside the Chinese Embassy to organizing community solidarity events in your country will be useful. It is important for the left in Europe to be visible in the solidarity campaign with Hong Kong, as if not only overseas governments and ruling parties will be visible as supporters of Hong Kong, and this is far from ideal as we know very well that their interests do not necessarily intersect with those of Hong Kong working people in the first place.